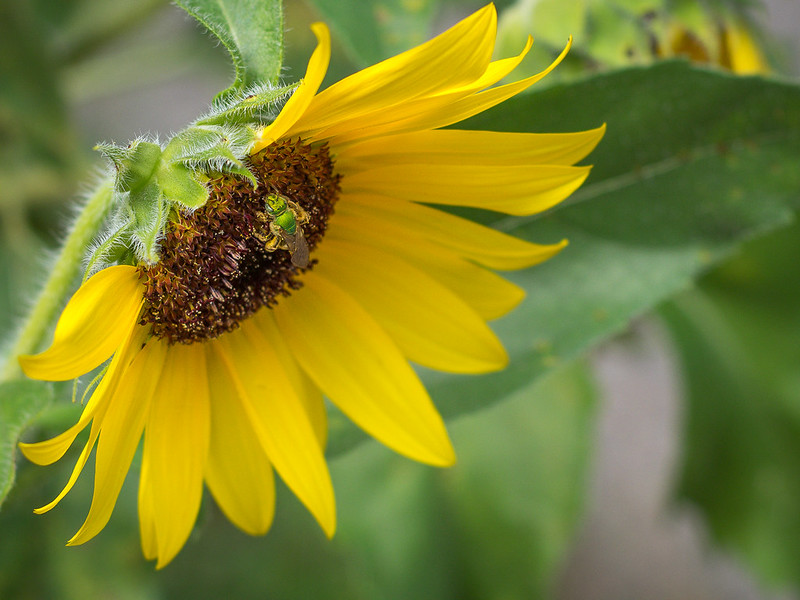 Sunflowers and Bees are neverending fun to shoot. But they need a solid close focusing lens to do so. For now I've been using an old Nikkor 50/2 from the mid-70's as one of my close-up options and the G3's kit 14-42 OIS as my other one. The 50's a nice little lens and I do enjoy shooting with it, while the 14-42 is boringly competent. Neither come close to ideal for this sort of work for me.

So I've gone and picked up one of the minor gems of the m43 system, Sigma's cheap and cheerful 60mm f2.8. This is a small lens, smaller than the 50/2 even before the adapter's mounted, dirt cheap and stunningly sharp. If you can live with its limitations, primarily limited close focus (0.5m, 1:7 magnification) and f2.8 max aperture, it's a real gem. This also gives me a rather competent 2 lens kit, with the 17/1.8 and this 60. All I really need would be a 10-12mm at the wide end. If only Sigma or Samyang made a compact 10/2.8 for mirrorless. Sadly Sigma doesn't make anything along those lines and Samyang's 10/2.8 is an SLR lens and rather huge. The best answer right now seems to be the Oly 9-18 zoom. Only time will tell if anything interesting will come along in this space, and if nothing does I can always get one of the two 12/2's available.

And What About Film? 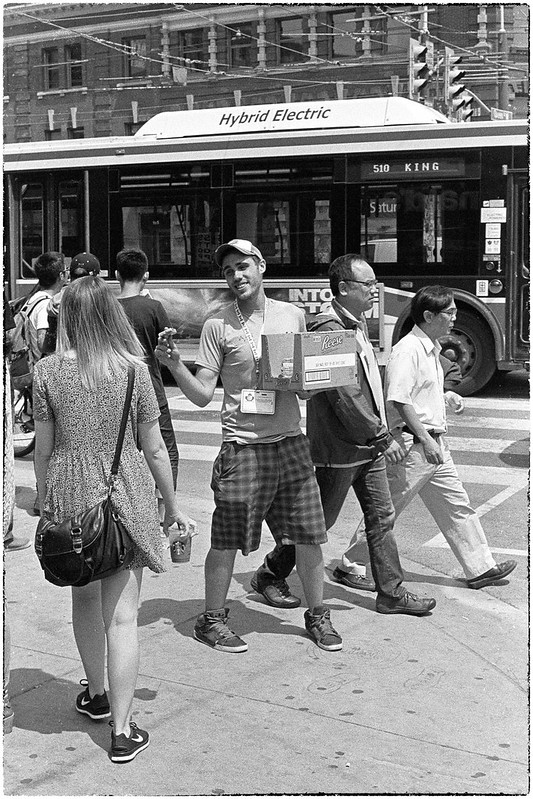 Now that I've hopefully settled on a Digital system it's time to consider what I'm going to do about my film shooting. Which brings the following resolutions & considerations.

1. I'm not giving up film. I enjoy shooting it too much
2. I'm sticking with 35mm for now. As much as I enjoy Medium Format, I'm not willing to haul the gear right now.
3. I'm not going to flail around systems. I'll stick to my comfortable choices, IE Contax and/or Nikon
4. I really do need a solid scanning solution.

The first is a simple acceptance of my choices, I've always ended up grabbing a cheap film camera and enjoying it. Not going to give that up anytime soon. Frankly I still prefer shooting with a 35mm manual, mechanical camera over everything else.

The second is simple reality. I like MF. Actually I love MF. But I'm not willing to invest in it today. Maybe if I ever get back to shooting 100+ rolls a year I'll take another look, but not for now.

The third is more of a hope. I've owned pretty much every common system except Leica R, Minolta SR and Canon FD. I keep coming back to Contax and Nikon. Frankly I've got a mild preference for Contax, but have found Nikon more reliable and economic. I'm shooting Nikon now, but if I'm only going to have a handful of film kit I will probably switch to Contax at some point.

The fourth is the real holdup to shooting more film. Flatbeds don't deliver enough quality and simply replacing my Minolta SDIV will just result in more issues. I'll either need to buy a new scanner or save up and acquire a Nikon Coolscan 5000ED, the latter being the dream. But I'm not looking at either option until I break 52 rolls in a year. No point in spending money for something I'm not committed to.