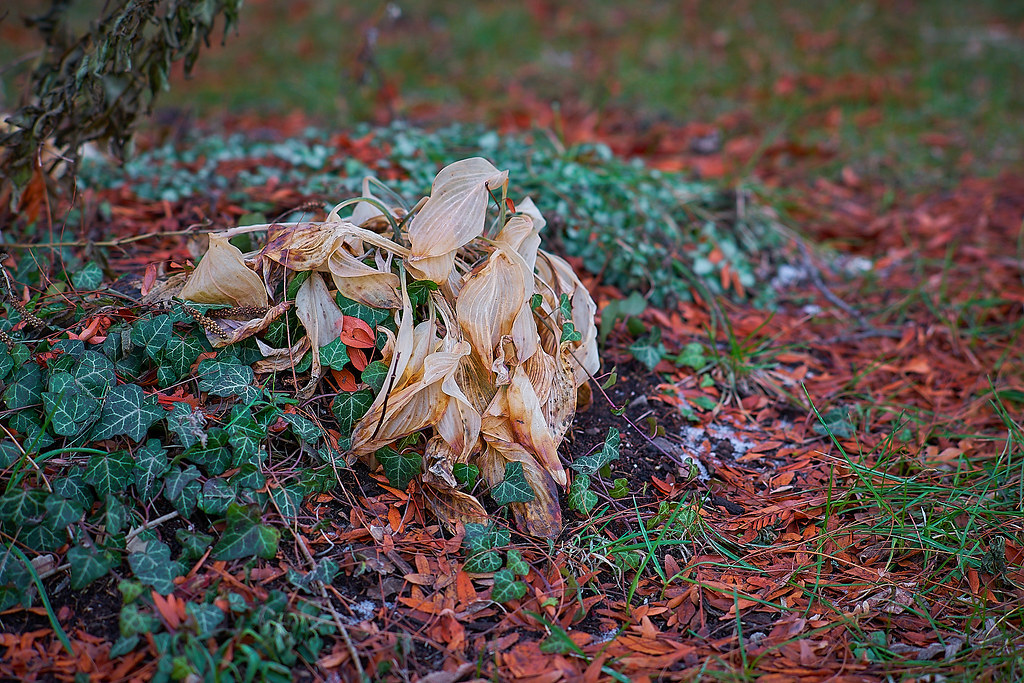 
So we're at the end of the first full year of competition in the FF mirrorless market. So where are we.

Sony remains the clear leader, having benefited from the competition largely targeting their long-running A7 mkII series in terms of features and performance, despite Sony launching the A7RIII in late 2017 and the A7III in 2018. Now 2019 saw the A7RIV and A9II arrive, and the A7RIV certainly sets a new standard for high-MP bodies, although the A9II truly is little more than an optimization of the A9 design, adding little, but removing a lot of the rough edges of the first generation model.

Sony continues to both round out their lens line and garner increased 3rd party support, especially with Tamron truly coming into the game with their new lens lineup (up to 5 FF lenses, with 6+ more coming) and Samyang turning into a real player in the AF market.

Nikon seems to have quietly become the default alternative. Their bodies are good, but look deliberately designed to come in below the equivalent DSLR body. That works OK with the D850 vs Z7 mix, but the D750 is so much cheaper than the Z6, and arguably more camera in most regards (except video). The lens lineup is steadily growing and aside from the silly 58mm f0.95 it's a very sane and well laid out lens line and growing steadily. The new Z50 is to the D7500 much as the Z6 is to the D750. Nice little body, but some obvious deliberate limitations on features vs a body which is now decidedly cheaper. The FTZ is a solid adapter, but Nikon should do a cheaper ETZ adapter that only works with E lenses to drive adoption of their E lenses on Z mount. This would match up particularly well with exotic lenses like the 105/1.4E and the PF superteles. Nikon really needs to do something to start driving 3rd party support. The Tamron & Samyang small lenses would be great additions for the system.

Canon has launched a dream lens line for the serious shooter, and paired it with two bodies that don't make sense in context. I think their basic RP body is a really nice alternative to the A7II as a discount body, but it lacks a really decent set of kit lenses to match up (Sony at least has the 28-70, but lacks a FE 70-xxx lens to match). The R body seems kinda like a UI test mule that Canon stuffed into production to meet an unexpected release timeline. Not bad, but some odd UI bits that aren't well integrated (mostly the touch bar) and it's otherwise a slightly crippled 5DIV. Canon needs a body that matches their lenses and lenses to match the RP body. Canon's also seen the beginnings of 3rd party support thanks to their reuse of a lot of EF mount engineering.

Panasonic launched 3 bodies, matching Sony's generalist, high-res and video specialized A7 variants. And those bodies promptly sank out of sight almost immediately. The bodies are well designed, but huge, the lenses are huge and insanely priced (and are still cheaper than the alternative Leica lenses) and the lack of any usable Continuous AF at a point where the primary differentiating performance factor in mirrorless is continuous AF performance results in a very good system that just couldn't get any traction.

Sigma did join the market with a very nice little video-oriented body also in L mount, a first for Sigma (best known for their terrible SA mount cameras). And this time it's actually using a proper Bayer sensor instead of the Foveon stuff they were peddling before. Leica also released a new body, but it's basically a SL body with a Panasonic S1R stuffed in, although with Panasonic & Sigma now in L mount, Leica's offerings more practical now and while overpriced the Panasonic lenses are much more reasonable than Leica's own.

Where does that leave me?

Sony for the foreseeable future, although I could transition to Nikon at some point if I don't get too deep into native FE glass. Who knows, I like the Nikon ergos better, but overall the Sony ecosystem fits my needs better for now.

Email ThisBlogThis!Share to TwitterShare to FacebookShare to Pinterest
Labels: Chasing the Dragon, Gear 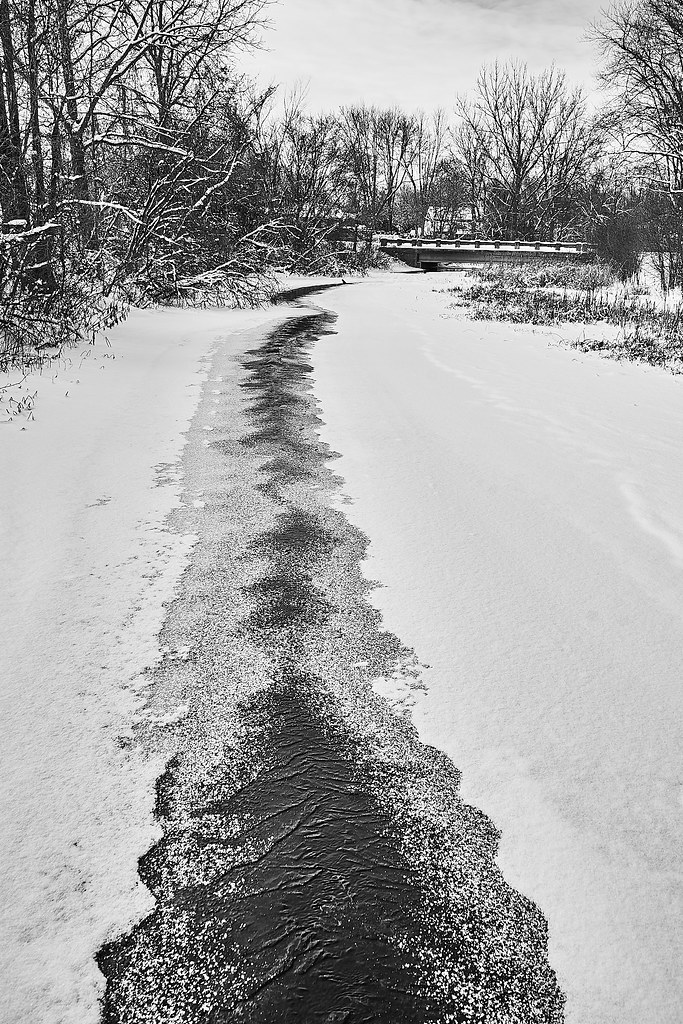 The Beaver River in Cannington, ON, frozen over.

I'm up around 900 shots on the A7II at this point, and overall it's working out for me fairly well. Very definitely in the comfort zone now, but that was pretty much immediate since it's only been a year since I sold my previous one.

I've had it for 6 weeks or so, so at 900 images I'm a little light on shooting activity compared to what I've done over the summer and early/mid-fall, but that's mostly due to work and the usual late fall blahs. I'm busy, it's cold & dark after work and it's mostly been a dead zone in terms of subject matter until the snow fell. I just have no interest in shooting bare trees and brown soil.

I do like working with the A7II and manual primes. I find the FE 28-70 kit zoom to be acceptable, but there's no love there (nor hate). The 50-135 really sucks to work with. It's actually pretty good in terms of IQ, but the long minimum focus distance everywhere except 50mm, the horrid zoom slop, even for a push-pull zoom and how finicky it can be for focus just makes the experience of using it to be a right PITA. Add in that there's no IBIS unless I'm willing to accept the crapshoot of the IBIS setting and zoom focal length not matching and the end result is I need to replace it with something, or ideally a few somethings.

I also need a UWA option. My original plan was the upcoming Tamron 20/2.8, however it looks like the manual focus experience for that lens is going to suck (based on the new 35/2.8 and 24/2.8 reviews) so I may just get a Nikkor 20 AI-S instead. Don't really need AF for that lens anyways.
Posted by Adam Maas at 13:22 No comments:

Winter on the Gull 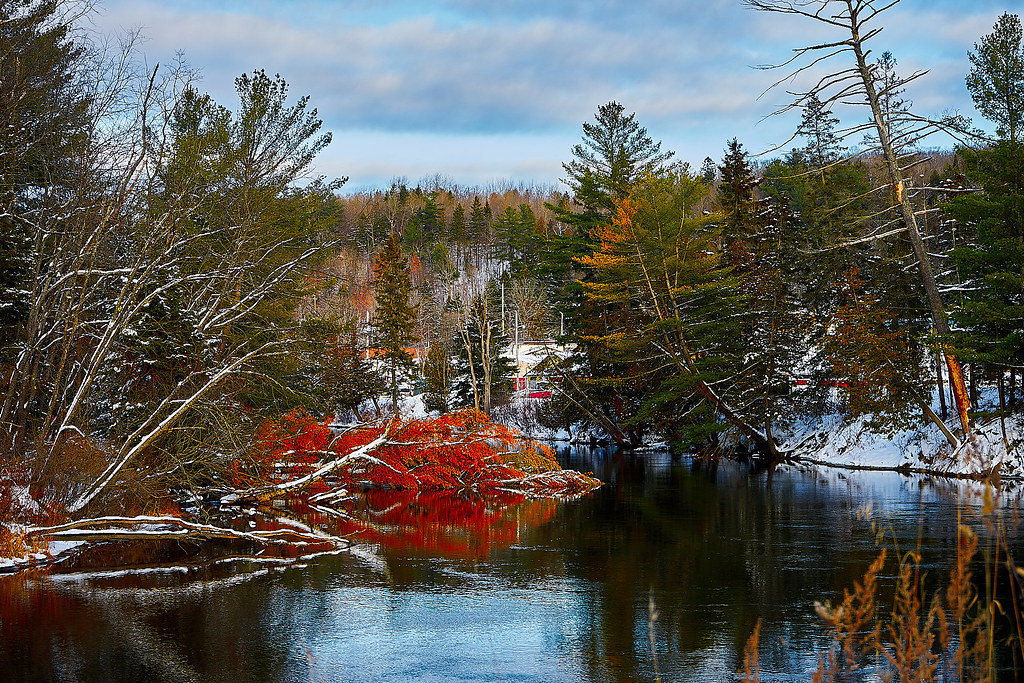 
This colourful shot was from my first real photo ramble with the A7II, taken in Minden on the Gull River in the Kawarthas.

I only took about 200 shots on this drive, but that was a combination of not passing any good hiking spots and general winter limits, plus a relatively short drive (left in mid-morning rather than well before sunrise). I was shooting from the car mostly, ie stop, get out, grab a few shots, get back in and drive on. That tends to result in less shots compared to my other style of photo ramble, where I'm doing a fair bit of hiking outside the car. I tend to shoot a lot when hiking, but only grab 3-4 shots per stop when doing the drive+shoot style ramble.
Posted by Adam Maas at 22:43 No comments: