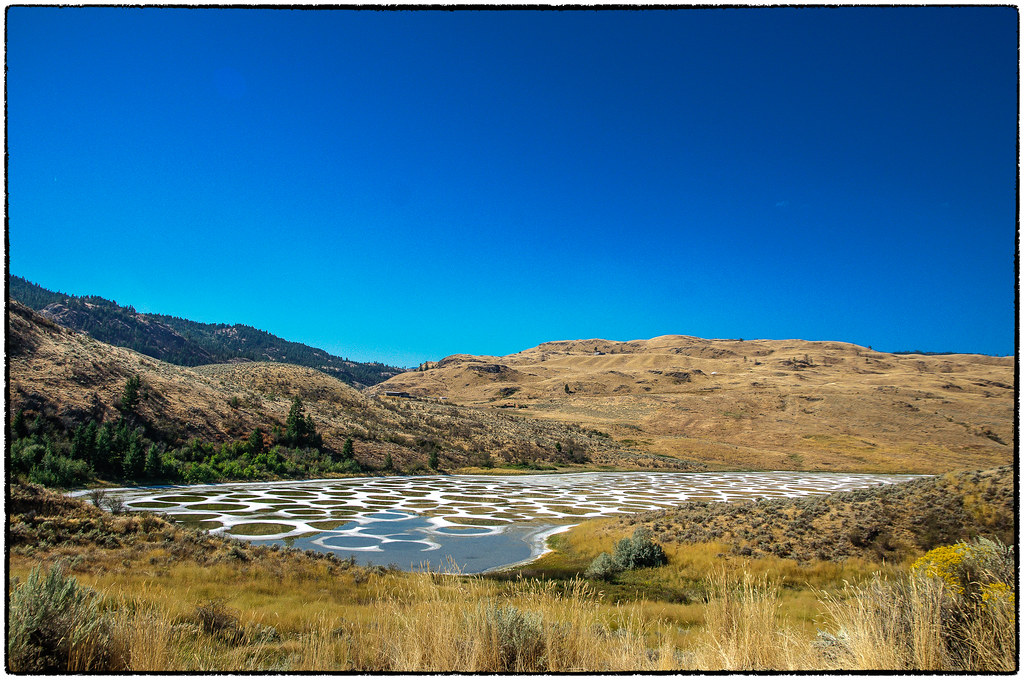 Spotted Lake is a unique find, located just west of Osoyoos on Band land, but visible from the Crowsnest Highway. It's a lake filled with mineral salts, giving it's unique spotted character.

It's pretty difficult to photograph, as there's really a single vantage point on the side of the highway and the lake itself is inaccessible and access is strictly controlled by the local Band. 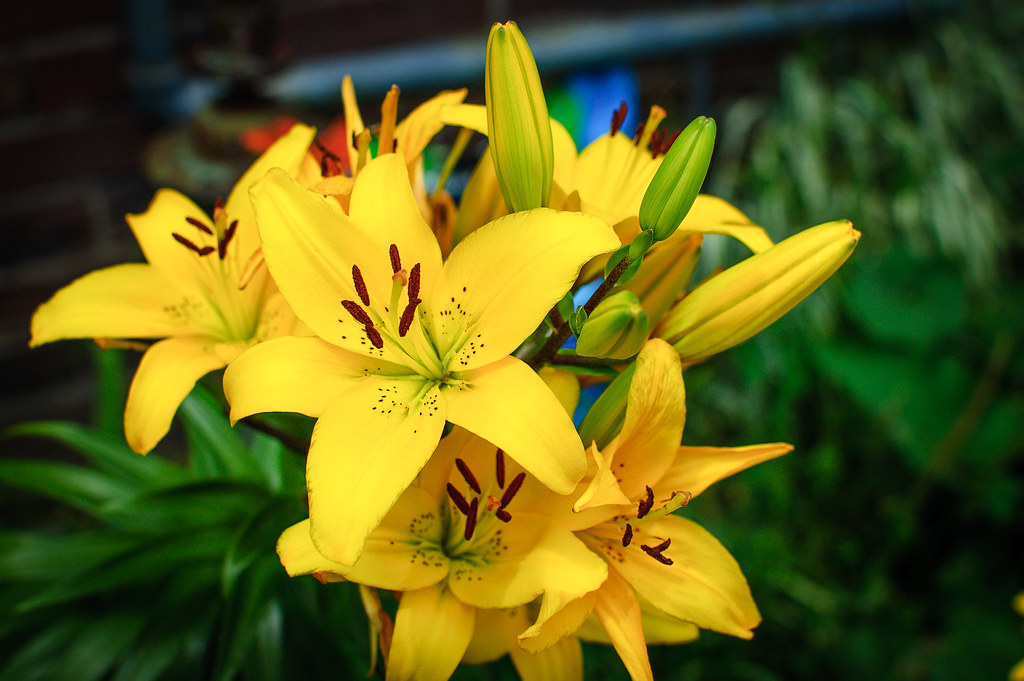 This shot was taken with a free camera. I was given a D70 last year for free (no accessories), and shot a little with it. Not bad at all for a 15 year old camera and a 10 year old lens, eh? Body didn't last long (it expired recently from the common CHA error), but for the price, who cares.

Today I did even better. For $20 and an old film camera, I got another D300. Same deal, no accessories (Battery, charger, etc) but I have all of that already, at last count I had 6 batteries, 3 chargers and around 30GB of cards usable in a D300 or other compatible body. This one's a bit of a beater, peeling rubber and some definite wear, but full functional.

It's an interesting world when a completely competent, even by modern standards, body like the D300 can be had for essentially beer money with a little horsetrading. heck, you can walk in to most stores and buy one for $250 or so with zero dickering, and that will even get you a 2 month or so warranty. Want to get into shooting? You'll get a lot more out of a D300 and an old 18-70DX than from any D3x00 or D5x00 body. Sure the newer consumer bodies have better IQ, but everything else is better on the D300, from battery life to AF to build and speed.

So live a little, grab a cheap little Pro body and experience one heck of a camera for very little cost. 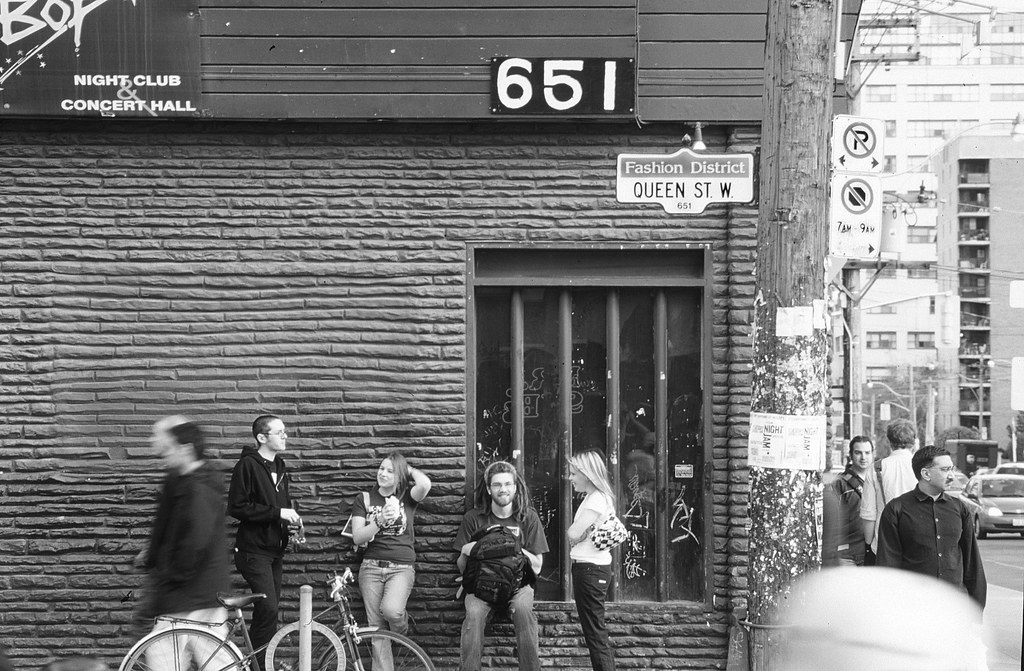 Not sure what camera, probably a Nikon FA with a 50/1.8 AF, definitely a B&W Conversion from Kodak E100VS slide film.

This is currently the oldest image posted on my Flickr, and may actually have been my first post (after 13 years, I don't remember). It's not a great image, but it is a decent street candid.

I joined Flickr in May 2005, a few months before I started shooting digital seriously with a Pentax *istD, the camera that started me on that near-endless hunt for the Right System.

That brings me around to my photographic goals for 2018. I've tried setting goals and it's rarely worked. I'm doing something a little different this time.

Goals 1 & 3 are intended to refocus me from gear considerations towards shooting. #2 is largely about getting more engaged on Flickr.

My stretch goal is to post at least once a week here for the duration of the year. I've neglected this blog too much over the years. 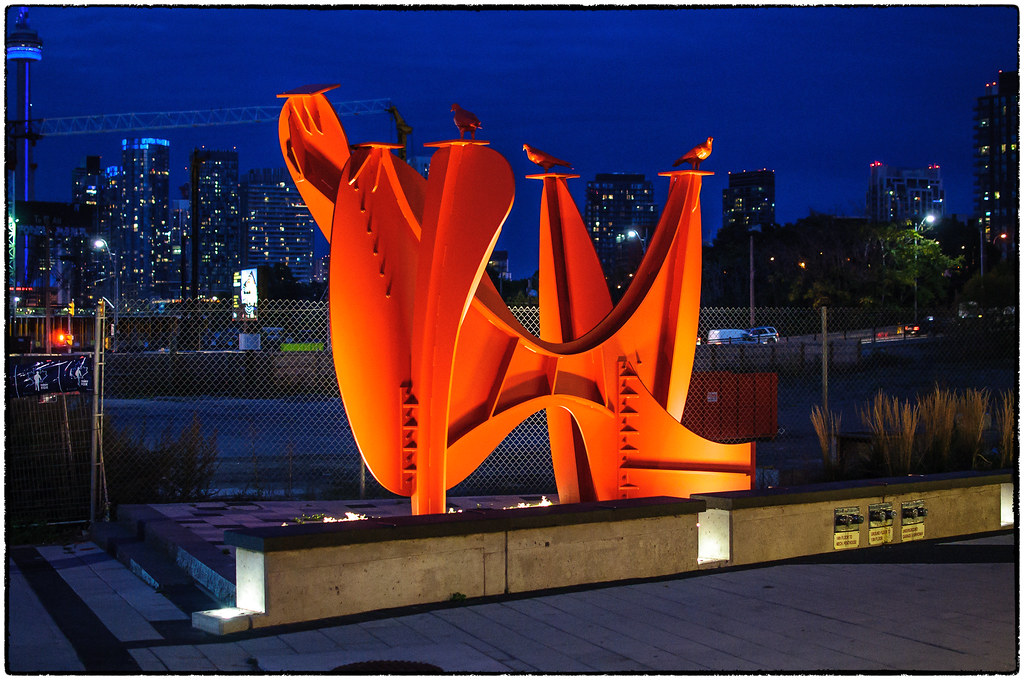 It's no secret that I've been struggling with shooting motivation over the last 5 years. I've been pretty open about how that's affected my film shooting, but less so about how that's affected my digital. Largely because I'd always assumed that film was my 'real' shooting and blamed a lot of my motivation issues on equipment struggles on the digital side. To be blunt, I love the promise of mirrorless, but the reality has never quite worked out and I was over

To elaborate, I shot the following number of digital images in each year since 2012 (my last year of full-time school, I finished school in June 2012, but didn't officially graduate until 2013)

As a rule, I usually have a bump in production in around March, then things taper off until June, with July/August/September as my main shooting season. It's pretty clear that whatever was affecting my motivation, it bottomed out in 2015-2016 and things started looking up in 2017. I suspect the numbers are a bit off the actual trend as 2014 was the year I made a kick at the can shooting Nikon again, and that bumped the numbers up for the fall by a large amount. Never should have traded that stuff away.

Chasing the Dragon has been a big deal for me, and a major negative impact on my work. It's no surprise that my shooting started to recover when I quit fooling around and just bought an older Nikon that I knew worked for me (D300), although the decision to get rid of the mirrorless stuff and swap it for a D90 in mid-2016 was a solid idea. I think if I'd ended up with a D300 then, I would have seen my numbers recover then, rather than a year later, but that really was a matter of what I could get from trading in my m43 stuff (it's been a long time since I've actually invested real money in camera gear, it's always always been swapping plus beer money since I left Verizon in 2011, the one real exception was getting the EM-1 in 2015). It's now been nearly 2 years since I quit chasing the perfect system and I think I might just have got things finally sorted on that front.

The reality is that I'm quite comfortable shooting older Nikon kit, it's cheap, I like the results and I'm motivated to shoot. That has other benefits (especially health related, if I'm shooting, I'm walking and health & exercise is another area I've struggled with for the last few years.). And well, if my D300 dies, I'm $200 away from a replacement (amazing considering it was a $2200 camera when new and is still very capable)

As to mirrorless, I think there will long be a place in my kit for a small body with a 28mm equivalent. But nothing beyond that. As much as these systems appeal to me, what I've got works, and I shoot more when I'm using it. 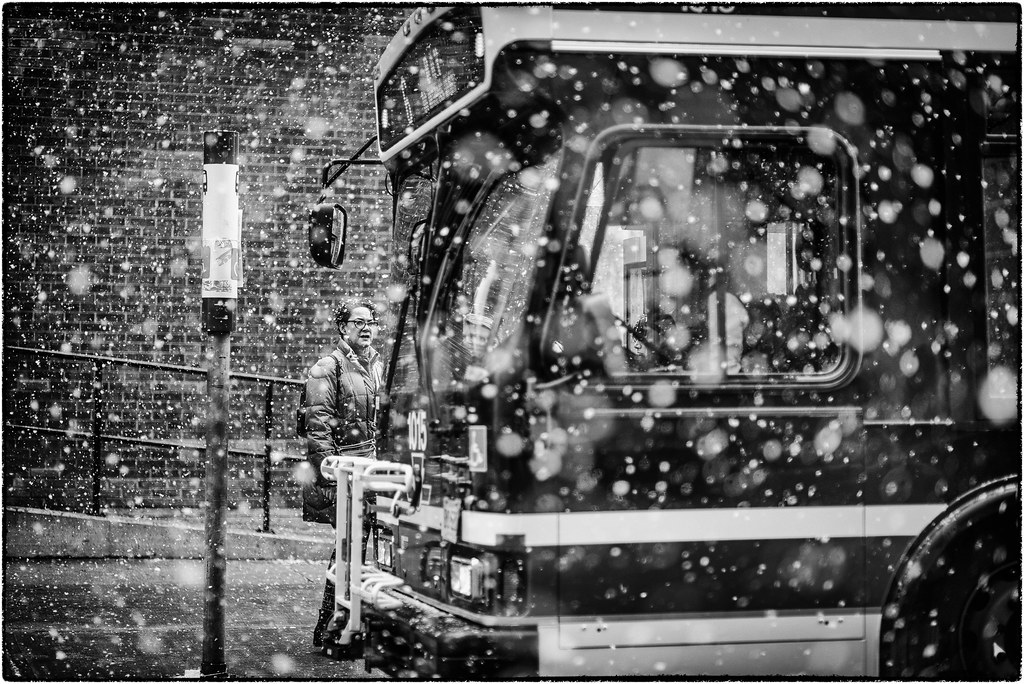 Shallow DoF shots are in my opinion one of the most abused photo techniques in existence. Far too often I'll see shots that are quite frankly ruined due to the use of too little DoF, especially portraits where only the eyeball(s) are actually in focus.

That said, there's a time and place for shallow DoF and shooting wide open with fast glass in good light. It comes when you're isolating a subject from its surroundings, such as the woman in the above shot. That was in broad daylight at f1.4 and the lack of DoF pulls the woman and  the bust stop pole out of a very busy shot.

I personally have long tended to shooting with lots of DoF, and of late have been looking at a lot of environmental portraiture and short-DoF landscape/cityscape work and have been enjoying it a lot more. While some fast glass aficionados do need to remember their lenses include a diaphragm, I need to remember that there are apertures other than f8 and my shutter can safely go above 1/1000 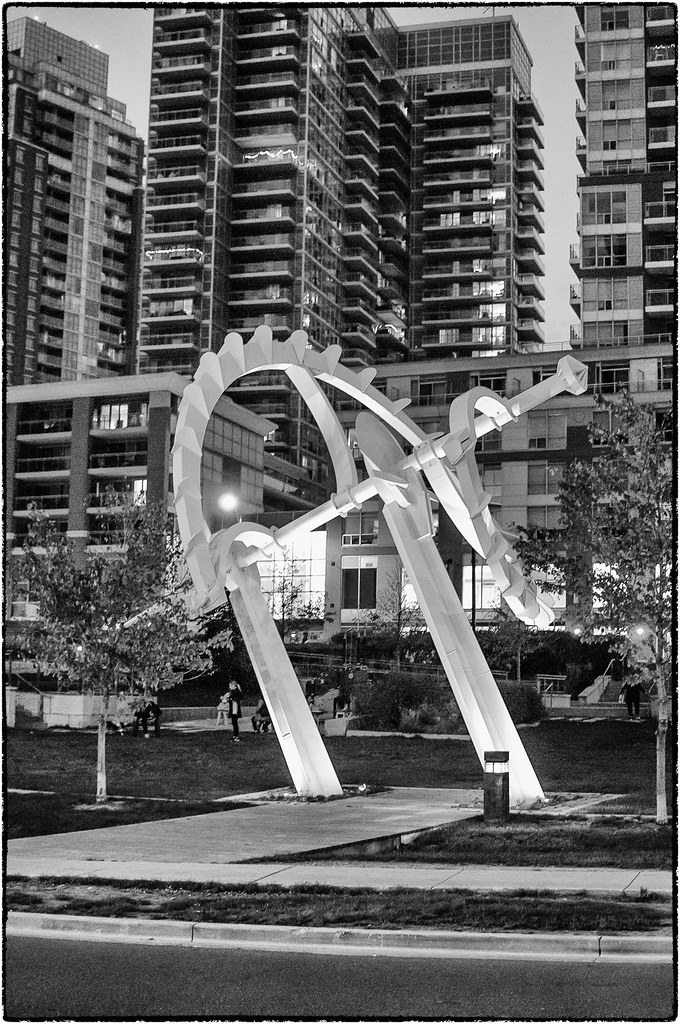 
While there hasn't been much posting, I did keep shooting regularly through the end of October, before a combination of weather and minor health issues stopped me for the winter. Ended up with about 2500 shots for the year on the D300, which is the most I've shot with one camera for quite a long time.

This year I intend to concentrate on getting out more and shooting more nature & landscape work. I do love it and haven't done nearly enough of it of late. City photography is somewhat boring me, but even then it's interesting when I get to see some new sights. Expect more from smaller-town Southern Ontario and less Toronto-centric work for the year. Also likely some more low-light work, another area I enjoy and haven't done enough of lately.