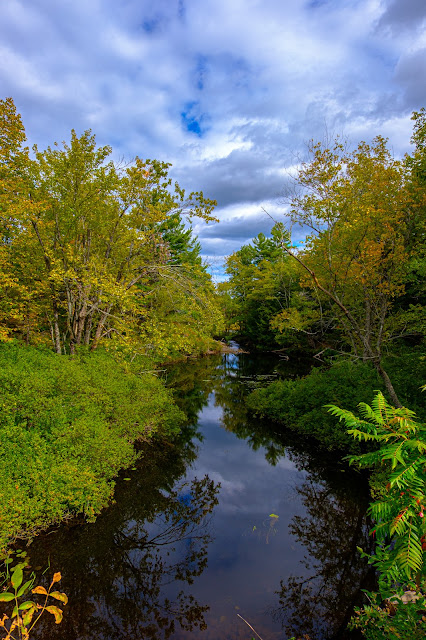 It's been a month since my last update, and there's a few reasons for that. Largely work, the last 2 months have been flat out for various reasons, but I also found myself unexpectedly on the Board of a national non-profit organization as of the end of September. That's been occupying much of my free time right now.

The image above is from the last chance I got to go out and do some photography, a drive up to Bala, ON and back on a Saturday morning before I stopped in at a friends in Barrie for the evening. It was a good, if short trip with some interesting skies.

The X-T2 is now up over 3700 images and continuing to climb. Still very happy with it. That said, we're now heading into a dead zone for me, the gap between fall colour and lush snowy winter. So while I'm hoping to get some late fall colour over the next couple weeks, shooting will die off in November.

On the gear front, I note we've seen a number of new introductions this week.

Canon updated their popular low-end EOS M50 to the EOS M50 II. As far as I can tell, this is entirely functionality that should have been added to the original via a firmware update. It gets a new model in stores, but the old model is pretty much identical.

Nikon launched the Z6II and Z7II. These are a mix of one real improvement (dual processors) and features that the originals should have had (grip, dual slots). Pricing is wise, the Z6II hits the original Z6 price of $2000USD while the Z7II actually launches $400USD below the Z7 price, eliminating the biggest mistake with the initial Z7 launch, it coming in at more than the more capable D850. A couple updates to the lens roadmap, but nothing in the biggest area of concern which is the lack of consumer lens options for the Z5. Now that's an area where all the full-frame systems are weak, but Nikon is the weakest and in a position where they need every sale they can get.

Fuji launched the X-S10, bringing DSLR ergonomics and IBIS to their mid-range. It's a mix of X-H1, X-T4 and X-T200 and looks excellent, taking over from the X-T30 as arguably the best body in its class (and putting a huge shot across the bow of the A6600 which is more money and less capable aside from AF/Buffer). Fuji did miss the chance to bring competitive viewfinder magnification to the mid-range (which I think they should do to better differentiate the mid-line from the X-T200's). They also missed the chance to make the bodies match the mid-range lenses in terms of WR. I don't get why all Fuji's mid-range lenses are getting WR and only the high-end bodies are. Fuji hasn't launched a non-WR XF lens in years. The X-S10 is on my radar though.