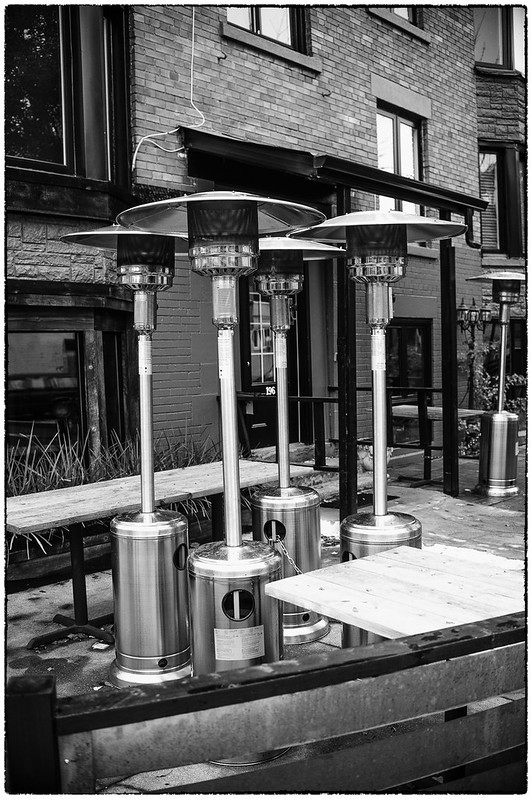 Having finally found myself with an FX body that I like I find myself considering how to put together a lens kit that both fits my needs and isn't going to cost a huge amount. Which has me looking at the value proposition for DX again.

Simply put, if you don't print huge, or have a solid collection of high-performance ultra-wide to normal lenses that are FX, or shoot a large amount of the time above ISO 800-1600, you should probably skip FX bodies and just shoot DX. There's little practical difference between FX and DX for 95% of uses, aside from the extra cost of FX, and there's quite a bit of extra cost.

1. ~3db SNR. That's 1 stop better performance. You aren't going to see that stop at low ISO, and at high ISO it means you can shoot 1 stop higher ISO. Or of course you can spend that $1000 and buy a lens that's a stop or so faster.

2. 1/2 - 1 stop more DR. This matters more at mid ISO's when DR is starting to drop than it does at base ISO, and modern DX bodies already beat older FX bodies in DR (they also beat Canon bodies).

3. 1 stop less DoF. This is nice when shooting shallow-DoF stuff. It's a right pain when shooting something that needs gobs of DoF. Most people need a little of both and DX is a better tradeoff here.

Now what do you give up?

1. Money. Not only are you paying extra for the body, but that sweet $500 17-50/2.8 OS that Sigma dominates the fast/regular zoom market with? The closest equivalent is Tamron's $1400 24-70/2.8 VC, and it's the only VR-equipped option. There's a couple steals out there if you look (Tamron's old 28-75/2.8 is remarkably good for not too much money) but in general the equivalent spec zoom is going to run twice as much, maybe 3 times if an UWA. Oh, and you need to buy a $600 1.4x TC to replace the reach you lost with your telezoom (at least the stop of light is offset by that 3db SNR advantage of FX). Primes are different, but only because there's so few DX primes (and half of them have no real reason to exist besides being cheap consumer options to go with the D3x00/D5x00 bodies)

2. Reach. Nothing puts pixels on a subject like DX. The D7000 matches the pixel density of a D810, the 24MP DX bodies all exceed it significantly. When you need reach, especially when you are already using a TC, DX wins. And nothing in F mount can combine reach and speed the way the old D300s can (12MP DX at 8fps)

What does this mean for me? Not a lot. I'm digging the D700 and still have my pair of DX bodies. But long term? If Nikon actually ever comes out with a D300s successor it's likely I'll move back to a pure DX system. I don't see Nikon making an FX light carry camera for me to replace my current D3200 with and going dual-system is too much of a PITA.
Posted by Adam Maas at 20:44 No comments: 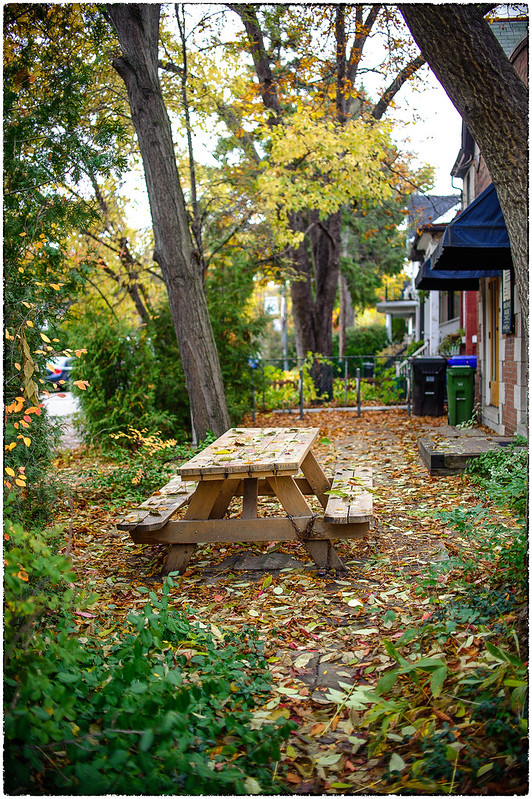 I've been shooting slowly but steadily over the last couple weeks. Nothing wrong, just the late fall weather limits the available subject matter and other commitments have been keeping me busy.

The D200's been semi-shelved for now. Nothing wrong with it, but most of my day-to-day shooting is before and after work and with sunset before 5pm here the D200's limited high ISO capability makes it a poor choice. The D3200 and D700 both do much better when the sun goes down, so they've taken over. Generally the D3200 stays in the bag, but I've been carrying the D700 on and off as it is simply such a good handling camera with gloves on.

One issue I've had with most mirrorless bodies is the small size and fiddly buttons & dials make for a camera that does not play well with gloves. The Fuji's are mostly an exception, as are the Panasonic GH cameras (and the new Samsung NX1 should also fall into that category) but the majority simply don't do well here. The D700 is excellent, and oddly I found the D600 better with gloves on than with gloves off. Most largish DSLR's are good with gloves on. I've not had the D3200 out with gloves on yet, but that's only a matter of time with the unusually cold November Toronto's been having.
Posted by Adam Maas at 22:19 No comments: 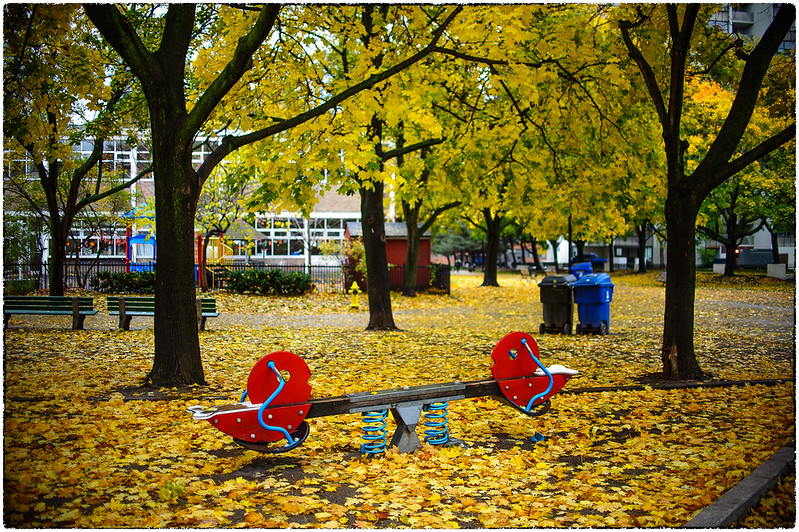 Well, here I am making a second attempt at going FX. This time it's with the FX body I always wanted in the first place, the D700, rather than the D600 I settled with last time.

The last time I went FX, last December, it did not end up working out well. First off I never really liked the ergonomics of the D600. The biggest issue was the grip, I found it extremely shallow and mildly uncomfortable, this is fundamentally what made me dislike carrying the D600. Initially I chalked it up to weight causing the discomfort, but 2 months carrying the similar in size & weight D200 indicates that it was ergonomics rather than weight that was the real issue. The D700 of course has very similar ergonomics to the D200 and much better ergonomics than the D600. The other issue with the D600 is my copy had weather sealing issues, I had some unusual behaviour due to a seal failure which caused an LV/WB fandago. The better sealed D700 should also not have this issue.

I also picked up the classic 28-105D at the same time, but that's gone back as it turned out to be badly decentered when shooting at 28mm and wider than f8.

Saturday the D700 got its first workout. I shot almost entirely with 2 lenses, the 28-105D and my 35/1.8G DX. The 28-105 did pretty well at the long end (the above mentioned issue caused issues with the wide end). Surprisingly the 35DX was outstanding, with very minor hard vignetting at the very outer edges and superb sharpness in Zone A and B. Sharpness does fall off a bit in Zone C (the outer area well outside the DX frame). I've long had a love/hate relationship with 35mm lenses on FX. The right lens gets me shooting constantly in that focal length where a lens that I find even just decent I tend to switch to a 28mm instead. For some reason I prefer shooting with a poor 28mm than a decent 35mm, but an outstanding 35mm beats both. After more than 150 frames on the D700 Saturday, including more than 110 frames with the 35DX, I'm definitely loving it. Not bad for one of the two lenses I expected to be dedicated to my DX bodies (the other being the 16-85VR)

I've also been doing a lot of thinking about lenses for the D700, going forward. I've only got a limited selection of FX glass right now as I am building up my system again. I still need to decide whether or not I want to buy lenses which support FM/FE bodies or not.

The core kit I'm considering is the new Nikkor 20/1.8G, the Sigma 35/1.4 and either the Sigma 105 OS Macro or the Nikkor 85/1.8G and the Sigma 150 OS Macro. unfortunately none of these lenses are compatible with an FE or FM body. The alternate would be either AI-S lenses (cheaper, not as good) or Zeiss ZF (more expensive, very good). Frankly I could live with AI-S, at least on the low-megapixel D700. I'd at least like the Macro to be VR/OS, however I'm not likely to want to use that lens on the FE or FM so that's a workable tradeoff. The 14 will likely be the Samyang/Bower/Rokinon while the 180 would be the Nikkor, probably the AF-D ED.
Posted by Adam Maas at 17:49 No comments: