First Days with the G9 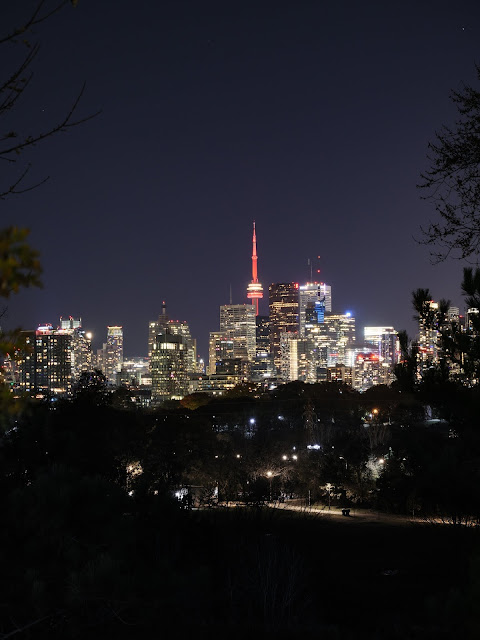 Panasonic G9, Olympus m.Zuiko 12-40mm f2.8 PRO
So far the G9 has been a pretty raging success for me. I’m over 1000 shots in on it in 5 days of ownership. That’s compared to 450 in the first week with the Z5, 440 for the E-M5.2 and 1000 for the E-M1.2. We'll see where I am by next Thursday, but it's likely to exceed the E-M1.2 count by a bit.
The image above is from a spot I've been meaning to revisit for a long time, it's a great view of downtown Toronto and the last time I shot there was in 2007 if I recall correctly, I was shooting with the Pentax K10D and Pentax DA 16-45/4 which I sold off in early 2008 to get my first D300. This is from Boradview Avenue about mid-way between Danforth Ave and Gerrard Ave, looking southwest towards the CN tower. It's really one of the best angles to shoot the city from, and since you're looking over the Don Valley but the DVP is mostly invisible from here, there's nothing really to distract the eye. I've driven by here a number of times recently and have been meaning to stop and get the shot. Last night I was finally able to do so and I'm glad I did. While I'm just not that interested in Cityscape work anymore, I do like to dabble in it occasionally.
The G9 worked very well for this. It's got a couple nice features for long-exposure work, specifically it counts down the remaining exposure on the display both when making the exposure (for exposures longer than 1 second) and while doing the dark-frame subtraction (aka Long Exposure Noise Reduction), which means you are never staring at the camera wondering when your camera will be responding again. The fact that it can be set to take bracket sets as a burst is nice as well, I've always preferred this as it makes getting good matching bracket frames much easier and it's something I've found lacking on a lot of recent Mirrorless Cameras including both the E-M5.2 and the Z5 (I'm sure there's probably some hidden setting I'm missing on the E-M5.2, but the Z5 simply didn't do this, and the Nikon DSLR's did).
Overall, the G9's ergonomics are just dead on, it's like a combination of all the ergonomic high points of the Z5 and E-M1.2 in one body, with a couple improvements of its own. Having a 3 position AF/MF switch under my thumb is excellent and beats the 2x2 switch on the E-M1.2 (which is more flexible as you can choose what it does, but flexibility doesn't add anything for me here because I use that for AF mode switching), plus a joystick like the Z5, but I can also get the touch AF control like the E-M1.2 if I want it. AF is as far as I can tell generally more configurable than the E-M1.2, although I do lose the ability to set a custom focus range limiter like the E-M1.2 can. It's more flexible than the Z5 because you can assign specific modes to buttons (which none of the Z's can).
Oddly, this is the first camera I've owned since the NEX-7 that won't let me re-assign the record button. That's not too big an issue here as it's located in a convenient but reasonably out of the way spot and there are so many other configurable control points (19 in all counting buttons, touch buttons and assigning joystick and 4-way actions) that I'm not losing anything by having a few buttons dedicated to specific functions (the WB, ISO and Exp Comp buttons are also dedicated functions)
Posted by Adam Maas at 11:28