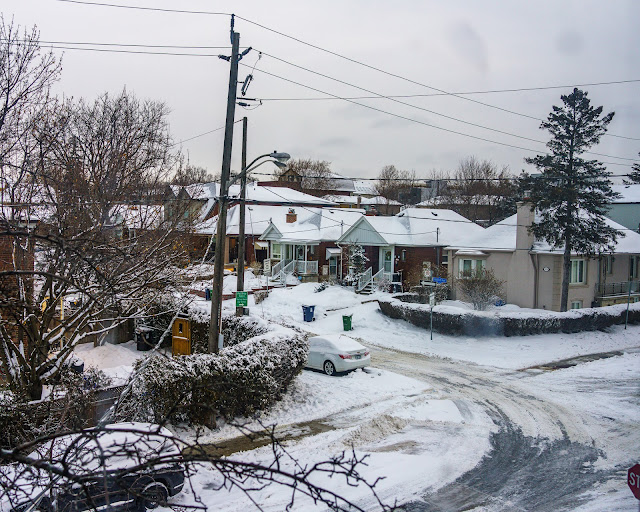 Sony A7RIV, FE 28-60mm f4-5.6
So both the G9 and the E-M5II are gone, along with all the m43 stuff including the MMF-3 and the 12-40 Pro that was much of the reason I got rid of the Z5 and bought back into m43
There was nothing wrong with this kit. It generally worked well for me unless the light got low. So why did I sell it?
There were a couple reasons.
1. Yeah, I still like shooting in the dark around the city. Especially in the winter and when I'm stuck close to home. m43 stuff just wasn't great for that unless you bought the f1.2 lenses, which are spendy and largish, defeating what is for me the biggest advantages of m43
2. If I was going to stay shooting m43 seriously, I needed to invest in a quality telezoom and UWA. That was going to cost me FF money
3. The rumours on the next-gen bodies which I would be looking at for long-term usage are all around a $2K USD price point. That's a hard sell when you are seeing A7RIV's coming in lightly used around $2300

Note I already own a pretty good but slowish telezoom in Sony mount, the Tamron 70-300 I acquired last fall. Should have kept the 16-35 ;-)

And yes, I got the A7RIV. Because the deal was insanely in my favour after the trade-in. Also picked up the tiny but excellent 28-60 for a good deal. It will be a bag lens and cover most of the gap between the 70-300 and the 16-35 I will inevitably be re-buying shortly. Cheap plastic, but sharp.

I looked seriously at a few options. Most notably the Z7, the A7IV and the A7RIV. The Z7II was too much money and I wanted a body with more than 24MP for reasons I'll get into.

The Z7 was the best deal on paper. A used Z7 with the excellent 24-70/4 S cost less than the bare A7RIV did. But the Z7 came with at least $300 in additional cost due to the card setup (CFE-B card is $180 minimum, plus at least one USB reader, maybe 2 as I need both a USB-A 3.1 reader for my desktop and a USB-C for my iPad Pro in the field) and delivers less performance in a number of areas over the A7RIV. Not so much in terms of IQ (the Z7 is more than adequate there) as AF, multi-shot and several other areas. The end result is that the Z7 would have cost me almost the same as the A7RIV did for less camera, but more lens.

The A7IV is a newer camera and in most regards somewhat more refined than either the A7RIV or the Z7. It also has a flip/twist display, which I prefer to the single-tilt display on both the Z7 and A7RIV, but the EVF is trash compared to the Z5, let alone the Z7 or A7RIV. But it's the most expensive of the lot as it would have been a new body. I could have swung the deal, but it just didn't make as much sense to me as a low-mileage A7RIV given the latter offers better build, better EVF and a higher-resolution sensor. I give up the faster responding UI (the A7RIV is already pretty good there), the CFE-A slot and the better AF tracking. Oh, and the A7IV is a little bit more money than the A7RIV I was looking at (I could have got an even lower mileage A7RIV for the same price as the A7IV)

Why not the A7RIII? They are a little cheaper than the Z7 used, but the UI and EVF updates to the A7RIV are enough to swing the difference for me, especially if I manage to keep this body long-term.

One reason why the A7RIV appealed was the possibility of keeping it for a long time. It's well known as one of the best landscape cameras on the market today, it's also for the most part Sony's best APS-C camera, I can run it in crop mode and get class-leading IQ, speed and the ergonomics that are lacking on all their actual APS-C cameras. Plus the body is reasonably sized (slightly smaller than my G9 was in fact), the ergonomic niggles on the Mark II bodies are mostly solved as well. Big buttons, better button layout, a joystick and a better grip with more finger clearance. Ditto for the battery life, the A7RIV is on the Z batter that's twice the capacity of the W battery in the Mark II's. Responsiveness is also improved, it's faster all around (AF, FPS, UI), the menu's are improved, even if they are still Olympus-level disorganized.