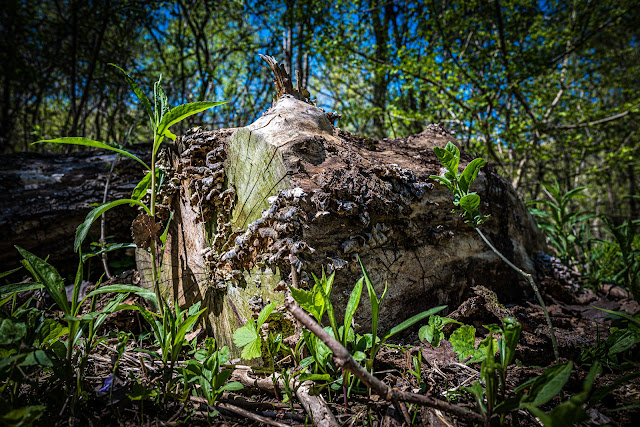 Did another hike yesterday. It's a great activity for exercise while maintaining social distancing, you don't want other people around if you can avoid it. 11.3KM & 18,000+ steps on a moderate-rated '8km' hike. Yes, I keep getting bit by trail distance ratings being well off from reality.

Did make a few errors, mostly prior to leaving. First off, I forgot to charge my Z5 and had 52% battery when I got to the trailhead. Big takeaway there is that I need a USB-C PD capable adapter in the car, either a small power USB power panel or a 12V car adapter widget, my current unit just isn't delivering the power necessary to charge my Z5 (or my iPhone and iPad Pro for that matter). I also forgot one charged battery for the E-M5II, and of my 2 spares there, one wasn't charged either. Luckily I caught this early enough that I could use one of my USB charging docks to half-charge the spare BLN-1 on the drive (these docks don't pull a lot of power from the USB port, so they work with my current car adapter, but they're also very slow to charge, ~4 hours to full). Finally I forgot my PD Leash wrist strap, which I really like having for security when working in places where a dropped camera would be a catastrophic loss.

I spent the first half of the hike shooting both bodies, with the 70-300E on the Z5 and the 12-40PRO on the E-M5II. That mostly worked well, although to be honest I was really missing the Z5's better AF system control for some of the work I shot with the E-M5II. I did a bit of long-exposure work on the E-M5II here, and it mostly worked pretty well. The only real issue I had was one really nice shot that could have worked better if I'd bracketed it and merged the two images in post and I didn't think to do so. I took a break about halfway in at a nice shoreline rest spot and did some long-exposure work with both the E-M5II and the Z5. I did not have a re-occurrence of the issues with getting a usable display with ND filters on the Z5, I think now that it was a combination of the polarizer (I did notice both bodies displays darkened more with the polarizer than with a 10-stop ND fitted, but exposures were generally good) and the sun position (shining directly into the EVF sensor)

After the rest stop, I stuck the E-M5II in the pack and shot the rest of the hike only with the Z5 as a test. I used all 3 lenses, the Laowa 15/4 Macro, the Z 24-50 and the 70-300E. This worked generally well, but swapping lenses between the Z 24-50 and 70-300E is a pain when trying to work quickly (the 15 really doesn't suit quick work in the first place, so it's not so much of an annoyance). I really did appreciate the generally quicker control of the body, especially of the AF system. For all that there's some really valid complaints about the limited AF controls on the Z's vs the F mount bodies, they do generally do better than most comparable mirrorless bodies once you get used to the setup.

Moving between the two dissimilar interfaces in the E-M5II and Z5 is an exercise in aggravation, as the UI's are different enough and the capabilities also different enough that I have to context switch too much. The E-M5II has a lot of nice extra features, but I do have to work to access them, most are menu dives, the Z5 is a much faster body to work with and while the Super Control Menu is a lot more capable than the 'i' menu, the 'i' menu is more configurable and quicker to access.

This shows me that I really would be better off with 2 bodies in the same mount when working in the field, not 2 dissimilar bodies. Nikon is probably the easier to do this with as all the FX Z bodies are essentially identical in UI aside from the mode dial location and presence of a top LCD. Olympus would require two E-M1.2/3 bodies to get full benefit of a similar UI between both bodies, the E-M5's have the same basic menu structure as the E-M1's, but the body control layout is quite different with the E-M1's actually being closer to the Z's in control layout.

If I was to go to a 2 similar body setup on the Z's, I basically need the 24-70S (on my list already as long as I keep the Z5) and a new body to get all the basics covered. That could be a Z6 or Z5, or I could save up a bit more and get a used Z7 and get that glorious 45MP sensor and some extra crop capability. The Z50 is a non-option here as it can't share batteries with the Z5 and the UI is just enough different to make it a less than ideal change from the Z5.

The more I look at this, the more the Z system seems to draw ahead. As much as the computational photography extras help m43, the ones I have today really only serve to match what I can get single-shot with a Z, and the extras on the E-M1's are things that would be nice, but I don't need all that much (like ProCapture and Handheld high-res). LiveBulb is the real kicker here, but I've not used it that much at all. The long shutter limit of the earlier Z bodies (before the Z6II/Z7II) is a real annoyance, I can just use bulb, but then I need to math and hand-time. But I can do that if needed.
Posted by Adam Maas at 11:59