Out for a Hike 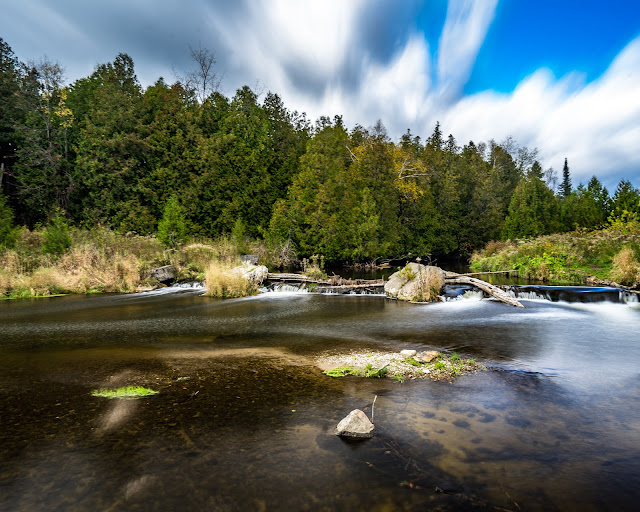 Sony A7II, ZA 16-35/4
I got out Sunday for some hiking with the new lenses. Didn't really get what I was looking for as the section of the Credit River I was hiking was mostly surrounded by Cedars rather than deciduous trees with fall colour, but the light was interesting and while it held I did get some nice shots of the river.

The shot above demonstrates two things I do like about the Sony A7/A7R MkII's. The dynamic range and the Smooth Reflections App. Yes, this shot was taken in broad daylight at f11 and ISO 100 with only a polarizer. It's an 84-shot in camera stack using the Smooth Reflections app that Sony offered on the first two generations of FE Alpha bodies and sadly discarded on the newer bodies (these apps are also on the A6300 and A6500, I'm not sure about the A6000). With the Oly's I would not have been able to retain as much detail in the clouds while also keeping detail in the water in the foreground, and I would have been stuck using an ND filter where I could get away with just a polarizer on the Sony (that said, on a current Sony body I'd have been stuck with the ND filter as well).

Overall in terms of package size, the A7II/16-35 package is actually pretty reasonable in size. I didn't find it too big or heavy for hiking. It's definitely bigger than the Oly setup, but not too big. Same goes for the A7II/70-300 combo which I found much better to carry than the Z5/70-300E combo, unsurprising since the Tamron 70-300 is 135g lighter than and marginally smaller than the 70-300E alone, and I needed to add an FTZ to the 70-300E to use on the Z5, which made the 70-300E/FTZ package almost 30mm longer and another 135g heavier compared to the Tamron 70-300E. That's worth 1/3 stop penalty at the long end and no lens IS for me, at least on an IBIS-capable body.

Nikon really does need to round out its telephoto options on Z mount and it's not just the exotics that are missing. Actually, if Nikon could just get Tamron to release their FE lenses in Z it would go a long way to improving things. The telephoto trio in particular would be great in Z (70-300 f4.5-6.3, 70-180/2.8 and 150-500) although the 28-75 and 17-28 would probably interest some for their size/weight advantages while maintaining f2.8.

One thing that did drive me nuts however is classic Sony bad UI design. The Smooth Reflections app locks out BBAF, but if you don't have Shutter AF enabled and you do have the AF mode set to S-AF, you literally cannot focus while using the app. I lost a couple shots (and this one is web-size only) due to AF issues from this. I'll have to use the app in manual focus mode (which is an App setting and cannot be changed from the Fn button). Frankly, this is just one of many cases where it's clear that the firmware developers were not photographers but rather were building menus from a spec sheet. All the bits are there, they just conflict with each other and provide the world's least helpful error messages (aka the 'Invalid Operation' button issue, where one button on my A33 gave that error if pressed while the image quality is set to RAW)